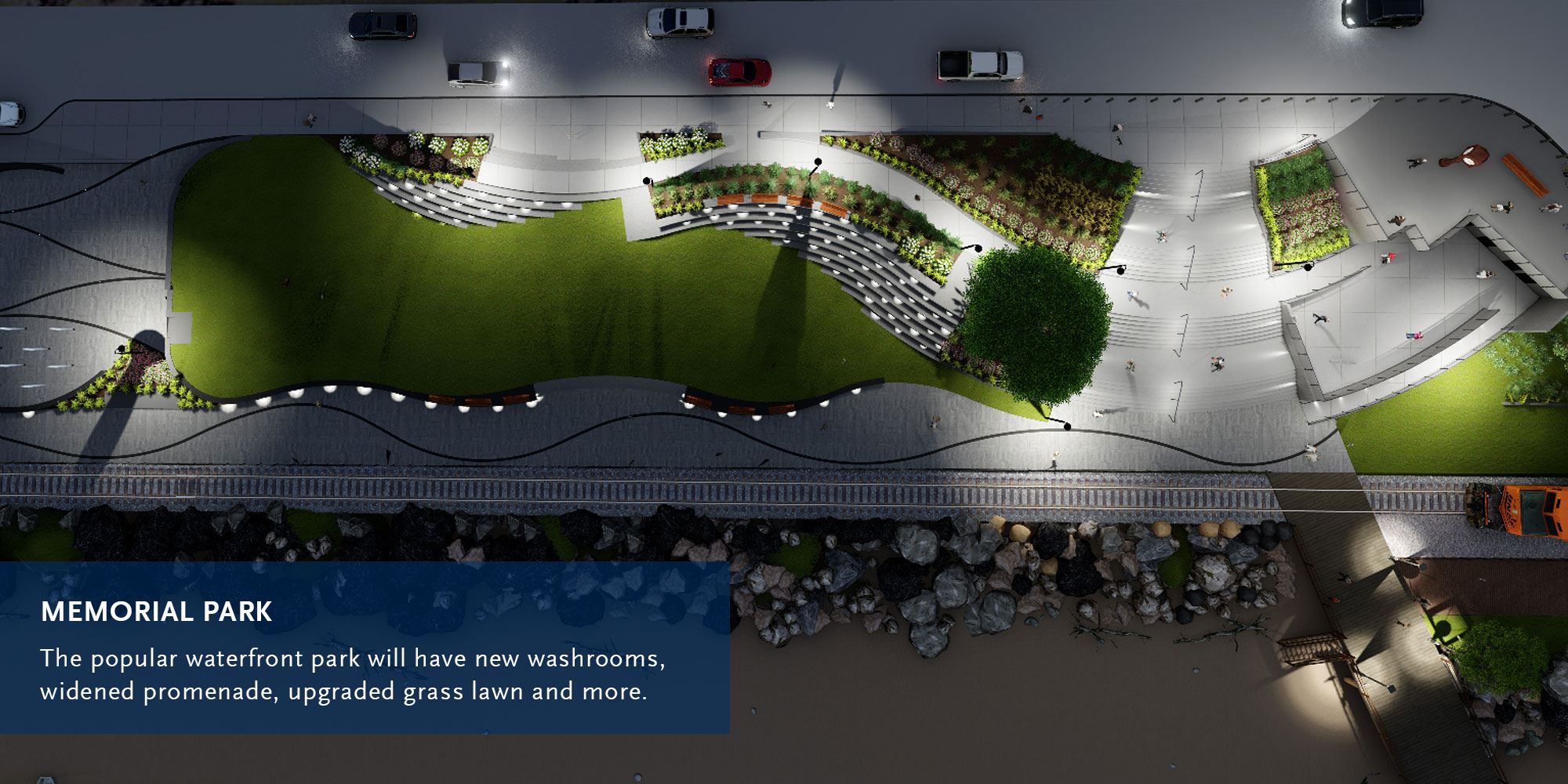 There’s no doubt about it - the pier-side lawn and panoramic ocean views that Memorial Park offers make the park a major tourist attraction and one of the City’s favourite gathering spaces! Because of the popularity of the park, and to accommodate the growth of White Rock, the City is upgrading the Memorial Park space and adjacent pier washrooms.

So, whether people gather for a picnic with the family, a day of soaking up the sun with friends, or for the perfect viewing spot for fireworks shows or one of the summer’s seaside concerts, Memorial Park is the place to be.

On the right are renderings of the approved design concepts.

Tourism is a key economic driver for businesses in the City. The City is committed to supporting businesses in White Rock by creating opportunities through investments in capital projects, festivals and events to continue to attract residents and visitors throughout our beautiful seaside community.

An area of focus for the City is our waterfront district, which is a major tourist attraction.

On the right is a short clip of the approved design concept of Memorial Park once completed.

In 2016, a Memorial Park Committee was established in order to discuss and prepare development ideas for Council’s consideration regarding Memorial Park in the City.

In 2016, the City also reached out to the Province of British Columbia’s Archaeology Branch to inform them of the Memorial Park project and inquire about permitting. The Archaeology Branch informed the City that it did not require a provincial archaeological permit as Memorial Park, owned by the Burlington Northern Santa Fe (BNSF) railway, is excluded from provincial jurisdiction because it falls under federal jurisdiction.

The tender for Memorial Park was advertised between June and July 2017. The award of projects is governed by Council Policy 301 (PDF), which requires Council, or if during Council recess, the August Contract Committee, authorizes approval for contracts with a value exceeding $250,000. The policy was adhered to in the tendering and awarding of this project.

Council awarded the contract to Fricia Construction on July 24, 2017, at the Regular Council Meeting.

March 1, 2018 - Statement from the City Regarding Empress Tree

The City held two Open Houses, one on September 14, 2016 and one on September 24, 2016 to collect feedback from the community. Information boards, imagery, and a draft concept were on display. Residents dropped in and shared their ideas with the team. Session 1 focused on collecting initial thoughts to improve the "working draft" concept. Session 2 showcased the revised concept plan and offered the opportunity for the public to add further insight.

If you were unable to attend the events, we encourage you to view the event materials from:

The City encouraged the public to complete a survey after Session 2 to gather further feedback and to allow any other residents who could not attend Session 1 or 2 to provide their input. And, collectively, the feedback pushed the project to grow from a washroom renovation and small park revitalization into a complete rework of the entire space.

The construction of Memorial Park was to begin in Fall of 2017 with the vision of having a Summer 2018 opening. Although project information and public engagement were carried out for this project and the City received approval from the Province’s Archaeology Branch, the project was delayed because Semiahmoo First Nation expressed concerns and wanted time to review the project and consult with the City. Out of respect for Semiahmoo First Nation, the City delayed the project in order for consultation to occur.

View a quick summary of some of the actions the City has taken to address the Semiahmoo First Nation’s concerns around consultation regarding Memorial Park:

White Rock staff will continue to engage and consult with Semiahmoo First Nation regarding archaeological concerns as it relates to Memorial Park and other capital projects.

After, three months of consultations with the Semiahmoo First Nation and the Province, the City received a provincial archaeological permit under the Heritage Conservation Act on December 13, 2017.

In early January 2018, the City began non-destructive testing for underground utilities, which started on January 3, 2018. The following are the “Next Steps” that the City has taken, or will be taking in regards to the Memorial Park project:

The City of White Rock will continue to engage and consult with Semiahmoo First Nation and other First Nations regarding archaeological concerns in relation to Memorial Park and other capital projects.