Culture, Connectivity and Community on the Peninsula

The White Rock Arts Festival invites residents and visitors to celebrate our Creative City by the Sea by participating in arts, cultural and heritage programming across the City on October 21 to 23, 2022. 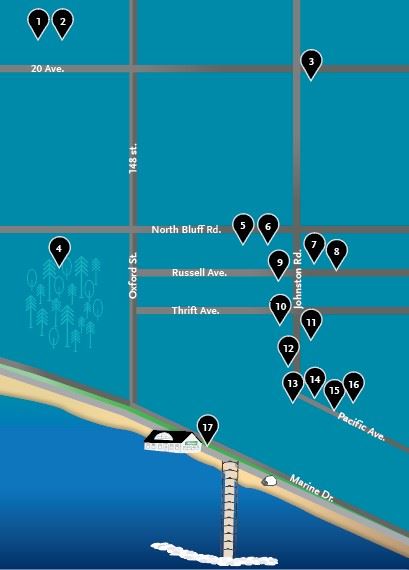 Download the schedule of events and location map or print at home.

Come out this White Rock Arts Festival weekend and be a part of the art scene.

Bring out the family and meet Carla Maskall, artist/illustrator of “What the Seal Saw,” and learn how to draw a seal.

Create a mural with artist, Allan Turton that celebrates White Rock! Pick up a paint brush and draw what makes White Rock special to you.

Participate in the raffle to win prizes, like season tickets to the Oceana Parc Playhouse, unique art from local Pop-Up artists and an art basket to infuse your creativity.

Listen to local musicians as you create!

Create a mural with artist, Allan Turton that celebrates White Rock! Pick up a paint brush and draw what makes White Rock special to you.

Participate in the raffle to win prizes, like season tickets to the Oceana Parc Playhouse, unique art from local Pop-Up artists and an art basket to infuse your creativity.

Listen to local musicians as you create!

Join us as we celebrate a weekend of cultural, creativity and connectivity.

Listen to Silverwood perform while enjoying refreshments and view the community artwork created during the festival.

Featuring talks, panels, and workshops from award-winning authors and poets across British Columbia, the Literary Festival will have something for every book lover in your family!

The Literary Festival is very fortunate to feature award winning & nominated writers from many genres and mediums, including poetry, children’s literature, crime writing, and literary fiction, including:

Nicola Campbell is Nłeʔkepmx, Syílx and Métis from the Nicola Valley, British Columbia. She is the author of five children’s books including, Shi-shi-etko and Shin-chi’s Canoe (recipient of the 2009 TD Canadian Children’s literature award) and most recently, Stand Like a Cedar (2021).

Her stories weave cultural and land-based teachings while also remembering sacred responsibilities and interconnectedness to the land. Published by Highwater Press, Spíləx̣m: A Weaving of Recovery, Resilience and Resurgence is a deeply-moving story basket of memories that is rooted within the British Columbia landscape. With an almost tactile representation of being on the land and water, Spíləx̣m explores resilience, reconnection, and narrative memory through stories.

Writer and editor Heidi Greco’s body of work consists mostly of poetry. Her most recent book, Glorious Birds: A Celebratory Homage to Harold and Maude (published by Anvil Press in 2021), served as a prose departure in that it celebrates one of her favourite films. While still writing (reviews, blogs, and poems), she continues to dedicate time to matters of environmental protection. She lives on territory of the Semiahmoo First Nation. Find more at heidigreco.ca

Jeremy Stewart's narrative long poem In Singing, He Composed a Song (University of Calgary Press) was shortlisted for the 2022 ReLit Poetry Award. Stewart won the 2014 Robert Kroetsch Award for Innovative Poetry for Hidden City (Invisible Publishing). He is also the author of (flood basement (Caitlin Press 2009). Stewart is a SSHRC Doctoral Fellow in English Literature at Lancaster University. He once dropped a piano off a building.

Sam Wiebe is the award-winning author of the Wakeland novels, one of the most authentic and acclaimed detective series in Canada, including Invisible Dead, Cut You Down, and Hell and Gone. His latest, Sunset and Jericho, comes out April 2022. Wiebe’s other books include Never Going Back, Last of the Independents, and the Vancouver Noir anthology, which he edited.

His work has won the Crime Writers of Canada award and the Kobo Emerging Writers prize, and been shortlisted for the Edgar, Hammett, Shamus, and City of Vancouver book prizes. His original film/tv projects have been optioned, and his short stories have appeared in ThugLit, Spinetingler, and subTerrain, as well as anthologies by Houghton-Mifflin and Image Comics. Wiebe is a former VPL Writer in Residence.

Thank you to our partners